Owen is fattening up. He likely weighs between 6 and 7 1/2 pounds now (boys tend to be slightly heavier than girls), and he's probably between 19 and 20 inches long. His organs are fully developed and in place, but his lungs and brain — though developed enough for him to function now — will continue to mature right through childhood.

Today is also my first day on Maternity Leave. At this point, it just feels like the weekend since Travis is never home on Saturdays anyway. But soon, it’ll start to feel like the longest weekend ever! It has been nice to be able to relax and be away from a desk and computer (although, clearly, not entirely away from them).

We’re hoping Owen will hold on for another week or so. That way our doctor will be back from vacation and maybe our camcorder will actually arrive in time to catch his first (post-labor!) moments.
Posted by Ashley at 4:11 PM

My pregnancy is now considered full term — meaning Owen is developmentally ready to handle life outside the womb. He probably weighs a little over 6 pounds at this point and measures between 19 and 20 inches, head to heel.

At the last appointment my doctor confirmed that Owen was head-down. Hopefully he’ll stay that way! She also hasn’t said anything about him probably being a big baby like his dad, which I’ve just been waiting and waiting to hear! Despite how large I seem to look, my stomach measurements are still very average.

My doctor is now out on vacation for two weeks, so he’s not allowed to come early! I don’t think that will be the case though. I think first babies are usually late.

I am now only working six-hour days because my doctor wants me to rest more. The swelling in my feet, ankles and legs is out-of-hand. Next Tuesday, the 27th of March is my last day at work before I start my maternity leave. I am looking forward to not having to sit at a desk all day. But hopefully I don’t get too bored at home either!
Posted by Ashley at 2:08 PM

The nursery is now officially complete. We re-arranged pretty much everything to get the large chair to fit well into the room. Our new camcorder that is in transit has a wide angle lens which will allow us to possibly take some better pictures (it takes still shots in addition to video). 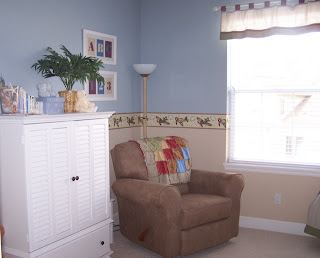 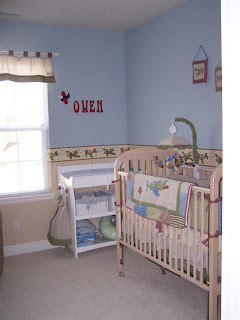 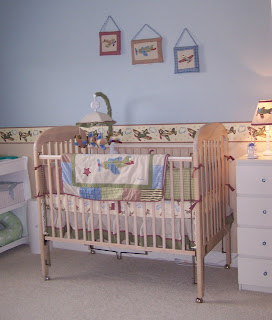 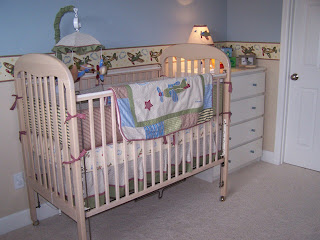 The shirt I am wearing in this photo accentuates how large I am. Every week I am in awe of how huge I am when I see a photo of myself. Good thing I don't feel as huge as I actually am! 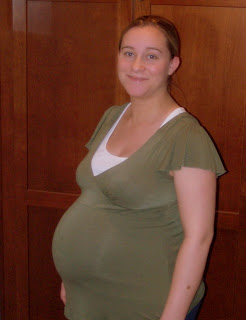 Some pictures from the baby shower on 2/24 are posted here:

http://picasaweb.google.com/ashleygabrielle/BabyShower
Posted by Ashley at 1:57 PM

Yep, I’m still pregnant! The end is a bit slow and long.

Owen is still putting on the pounds — about an ounce a day. He now weighs almost 6 pounds and is a little less than 19 inches long. At the end of this week, Owen will be considered full-term. (Babies between 37 and 42 weeks are considered full-term; a baby born before 37 weeks is pre-term and after 42 is post-term.) Most likely he's in a head-down position by now, which is optimal for a smooth delivery, but if he isn't in the next week, my doctor may try to coax him into a head-down position manually, by manipulating him from the outside of the belly.

I have no idea what position he is in, really. Several weeks ago the doctor said she thought he was head-down. I still can’t really tell what any of the bumps I can see through my skin are. No clear foot outline or anything like that.

We are halfway done with birthing class at this point. It has been hard on both of us to sit through a two-hour class right after work, but I think it will be worth it in the end. I can’t speak for Travis, but I’ve learned some things I didn’t already know. And it is good to feel like I have some sort of idea of what I am about to go through. Although I am sure nothing can properly prepare me for the true experience (or pain)!

We now officially have everything we need for Owen. My goal was to get this all done by 37 weeks in case he came a bit early. And we made it! We even got the rocking chair delivered early this week. The nursery as you’ve all seen it is about to change though. Things need to be re-arranged to make room for the large (but very comfy) chair!

I have Owen’s things picked out for the hospital. We bought a romper for him to wear home and are also bringing one that my mom bought him. Now I just need to pack my bag for the hospital. I’m dragging my feet a little bit because many of the things I want to pack … I still want to keep using!

Owen is getting big! He weighs a tad over 5 pounds (think bag of sugar) and is just over 18 inches long from head to heel. His kidneys are fully developed now, and his liver can process some waste products. Most of his basic physical development is now complete and the next few weeks are all about putting on weight.

I mean, that’s what they tell me anyway.

In reality, all I know is that Owen is very active still. Kicking and punching me at every opportunity. Or at least when I am trying to sleep!

The “uncomfortable” stage is beginning. But I’m finding ways to cope and relieve some of the pain.
Posted by Ashley at 4:50 PM 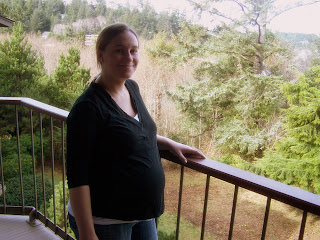 In the span of the last three days, I’ve gone from barely fitting into my favorite shoes to only being able to wear one pair of over-sized shoes to not being able to wear any of my shoes! My ankles have also swollen to the size of oranges. So socks are pretty much out too. Thank God for flip flops!
Posted by Ashley at 2:31 PM

Here’s what they tell me Owen is up to (probably):

Owen now weighs about 4 3/4 pounds and is probably almost 18 inches long. His fat layers — which he'll need to regulate his body temperature once he's born — are filling him out, making him rounder. His central nervous system is still maturing and his lungs are well developed by now. 99 percent of babies this age can survive outside the womb — and most have no major long-term problems related to pre-maturity.

We went to the doctor last Friday and everything is still looking good with the pregnancy. Everything is normal and average.

I think we are way ahead of the curve and very well prepared for Owen’s arrival already. We even have diapers now so we’re pretty much set. (Travis was excited to fill up the new diaper stacker.) There are a few more things we’d like to get before he makes his debut in our house, but nothing too critical. We have a rocker/recliner (the world’s most comfortable chair in my opinion) for his room on order that we’re hoping to get soon.

We are both really excited, although I’m not sure if the true gravity of the situation has really sunk in for either of us yet!
Posted by Ashley at 1:56 PM

Look How Big I Am!

Look What I Can Do!